a++ will buy again will replace immediately if lost cannot recommend highly enough. will talk [person] into letting me fedex it to his house if i lost it in desert and i have a dome or something similar.

someone posted it to portland-list today and it's on sale.

(this has my amazon associates id stuck to it because i'm too lazy to make links to amazon images except through that toolbar at the top of the screen. if you don't want to deal with that, just search for msw100 on amazon. follow the cheaper link, it's the amazon one.)

i will never buy anything at circuit city ever again[1] after how annoying that ad has been.

Is there someone driving from the hill who is going to glc trivia tomorrow and can give me a ride?

a comment from the new Mayor's ideas for seattle site:

Not only do I not believe cops recieve propper training, but while I acknowledge there wireless mind control devices that where put into there patrol cars to disorientate people and infact I have the patent numbers and product order sheets, I feel we missed the vote on as to where there ability to incriminate and sabatoge victums and yes they actively mess up victums making there lives worse, we should have the ACLU go over everything they actively use to segregate and kill kids...

-- i'm not sure whether this is 'donner kebab party' or 'sweeney kebob.' 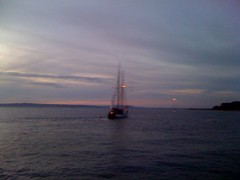 Lullaby Moon
Originally uploaded by Corprew / Zeitgeist.
Yesterday was the lullaby moon finale. I was somewhat late for it, but it ended as you might expect with the return of the egg and the dreamlanders sailing off into the sunset with the couple.

It's been an interesting several months of performances. I'm very grateful to Lucia Neare and her company of players for setting up this incredible play for us, and I also learned a lot from how the plotting engaged our civic places.

It's a wonderful thing, dreaming. It's great when someone gets to share a dream or a fairy tale with a city on such an epic scale. It's been a wonderful 12 months of storytelling and art.

I think the performance style really touched me, the way that the meaning was only slowly unveiled enabled us to interact with the characters in our own way and build meaning. I still remember the cat that winked at me in Seward park when she went by on her bicycle and the happy rabbit and Lucia smiling that stand out in the performances. It's memories like this that make spaces sacred and lose their everyday trappings and take on personal meaning.

I've been reading a lot of free kindle ebooks over the last month or so as I have insomnia problems. here are the ones I've been reading in approximately reverse order, the links are mostly to the non-ebook versions because of amazon's link tool being hideously broken for kindle stuff. I tend to read lighter stuff when I can't sleep, more involved books make it unlikely I'll sleep at all:

. The Dresden Files are a great detective series, much better than the related television series. I recommend them over all the rest of the supernatural thrillers that have come out in the recent wave. (re-read)

. Continuation of the Dresden Files series. Much better than the first book. Holds true to a few fairly predictable detective story tropes concerning information, though, which would render the story predictable if you've read Hammett etc.

. This book is a great detective story. Lots of fun.

. Someone said that RA Salvatore's books outside of the D&D realm are better. I gave two books of this 7 book series a try and I have to agree that they're better, still not 'good' though.

Queen of the Orcs: King's Property

. This is allegedly a feminist take on fantasy tales, but mostly glorifies unthinking violence with a romance subplot. I don't recommend reading this book, as its heavy handed attempts to make points mostly fall flat.

. About a quarter of this book is really bad, a traipsing through the stereotypes of urban fantasy. The other three quarters are great. I really recommend this book over a lot of the rest of the similar books I've read this year. A quarter of the book's content read like an editor told the author 'you have to put this in for the book to sell,' the rest of it was great and impassioned prose.

The Briar King (The Kingdoms of Thorn and Bone, Book 1)

. A great fantasy series. There are some slight problems with the kindle/iphone conversion that makes it slightly confusing to read at four points in the story -- I reported that to amazon, I don't know if it will get fixed.

Perdido Street Station. (reread.) I just don't get why this book is supposed to be great. Sorry. I gave it another chance, and it just leaves me cold.

This is a decent political fantasy story. worth reading for free on the kindle. the later books in this series are allegedly better, I think this book suffered a bit from the world building.
Collapse